Time sure flys while you are having fun. Our two oldest are back at college. They both are doing well this year. It is Joe’s last year as an undergrad and Sarah is student teaching. Drew is a junior in high school and in a couple of weeks will take his ACT test. They are all growing up. 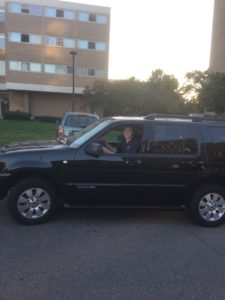 Our two oldest call occasionally and don’t keep us updated as much as we would like. They both took a car to school this year and a couple weeks after that Joe was in a accident (no one was hurt), but let’s just say the car did not last in Ohio for long. Both Joe and Sarah need cars at college this year due to college activities so we quickly found another used one for Joe that hopefully will last him until he gets his first job. We really didn’t have money for another car as this summer we remodeled the middle bathroom and our front driveway, so we decided to sell Susan’s mustang. We hadn’t used it much and with Drew driving very soon we might actually need a car for Joe and one that Drew can drive too.

Drew meanwhile made the JV soccer team playing defense again and is in the high school pit band for the play. This years play is Cabaret and he hopefully will get to play my fathers accordion on a couple songs. We have just had the accordion which is 75 years old tuned up by a local repairmen (they have those here in Wisconsin). He is also still leading the band as a drum major and of course has his AP classes so he is really busy.

Susan and I are staying busy at work. We did get to spend a couple days in Vegas last month as we each had work meetings a couple days a part in the same city. It was a great time and before any of the recent events which might make you look over your shoulders.

Our parents, three of which are in their 90s are not doing all that well. Susan’s two parents needed to move into an assisted living facility after her mother became ill. My father meanwhile is getting a pacemaker next week to help keep his heart beating at the right pace. I never realized how hard it can get when you get old.

So finally I get to the horses. Actually with everything else going on, we have not done very much with them. I did update the website a little with the new coding so that the cameras still work. The downside is that now you can’t view them on your smart phone. There is one more fix I can do to make everything work, but I haven’t totally figured that out yet. Otherwise no new horses, no horses sold, three cuttings of nice hay and here comes fall again.