So many things have been going on. It is March was busy as we had Joe and Sarah home for Spring break. They are both doing great. Joe is getting ready for graduation and Sarah is rocking her teaching job in Lacrosse. It sounds like neither of them are going to be living here this summer as Joe will be in Milwaukee at his internship and Sarah is going to be working in Lacrosse at the children’s museum. Drew also might be gone as he is looking at an international program. So we might have an empty house. We did have some horrible news in March also as Susan’s mother passed away at the age of 92. She was a wonderful woman and she had a great life, full of great children and great food. She always was a great cooker. She was a special woman and we will miss her forever.

April started out with a bang. I chaperoned Drew’s trip to Disneyworld. His marching band was marching in the parade again. I couldn’t believe that it had been 4 years since I went with Joe. This time I didn’t get to take the instruments, but instead I rode the bus 24 hours each way with the high school kids. It was a really long bus ride, but the kids were great. It was an exhausting trip for sure, but a blast. The best part was having the band win the band competition and get a Golden Mickey and watching Drew lead the band as a drum major marching down main street of Magic kingdom.

You might have heard about the crazy weather we have been having. Snow in April, 60 degrees in March. The horses don’t seem to mind. We did have a hard winter overall. We had to replace our furnace in the barn and also the one in the house. The good news is that the new units are more efficient and so they are saving us money after all but they costs a ton to replace. Around the farm things are going well. We finished up all the hay in the big barn and we are now on to the big bales in the arena – back shoot area. That should last us a long while which is good as we are replanting the other half of our hay this summer (we did half last year), so we might have fewer bales this year. Randy helped get the manure pile all moved around in the low area and we finally got ride of the manure pile completely and everything is smoothed out. I have been wanting to do that forever but the weather was perfect this year to get it done. We did have one Zippy foal born this year. The foal was out of a mare we had bred before. I nice little POA mare that has had one foal prior to this one. He likes them so much that he is breeding her back again. The other horses are all doing great. They are muddy, but soon I will get pictures. You wont believe how big Derby is. 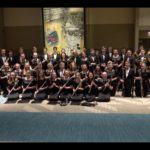 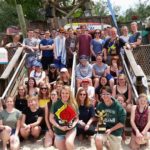 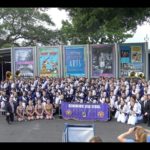